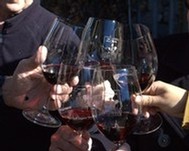 Stay up to date with what we are working on, talking about and exploring. From grapes, wine, travel and fun!

We had our first bottling day of the year on Tuesday, March 11th starting with the beautiful, transparent pink 2013 Grenache Rosato. While rusty from not bottling in a year, our first day was a success. We bottled 165 cases of Rosato starting at 9am, taking an hour for a delicious lunch provided by Carol and finishing at 5pm. We also got the opportunity to taste the 2004 Barbera, 2003 Sangiovese, and 2007 Sangiovese during our lunch. While each wine was exceptional the 2004 Barbera was by far my favorite (I may be a little biased toward the Zucca’s Barbera).

Tomorrow is another day of bottling. Here’s to getting the rest of the rust off!

Item was successfully added to your cart